That Person in the Front Row!

You know that person. You’re performing your heart out and all you can see is that one person, usually head down, likely looking at their phone, apparently lost in their own world,  not paying attention to you.

And then that little voice in the back of your head speaks up.

“You’re not as good as you think you are.”

As a normal human being, I’ve learned that no one doesn’t suffer from bouts of insecurity. (Yes, that’s an intentional triple negative.) But the last thing anyone needs on stage is a gremlin on your shoulder competing for attention.

That’s why, as a motivational speaker, corporate trainer, and musician, I’ve learned to talk back to that little voice. And that’s why I take every opportunity to make a big deal about unequivocally proving the gremlin wrong.

Last night was one of those opportunities. 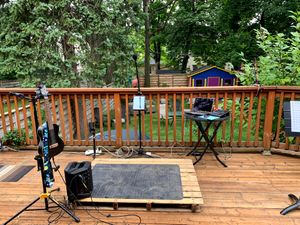 My trio was performing a live streamed concert off the my back deck, in front of a few live socially distanced people in the backyard. (Hey, we’re grateful for any audience at all during the pandemic!)

But there was this one guy…

Everyone else was tapping their toes to the music at the very least.

But not this guy.

The only tapping he was doing was on his phone. He almost never looked up. He never smiled.

I tried not to focus on him. I really did. And for the most part, I was doing a good job of it. But still, out of the corner of my eye, I could see him tapping away at his phone.

At the end of the concert, he came over to me, all smiles.

“That was really great. Really great. Loved it. Your band is great. Your songs are great. Every time you started playing a song, I was looking it up on Spotify. But that ‘California-Ioanna’ song you played wasn't coming up at all. I couldn’t figure it out. I tried other sites. Really great song. And then my friend told me that the song is an original. You wrote it? Really? It should be on Spotify! It’s great! I loved it.” 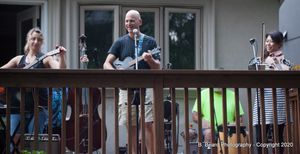 I looked at him and said, ‘Thank you, that means a lot to me.”

If only he knew…

I wrote this blog post to remind myself how often the gremlin gets it wrong. But if it works as a reminder for you too, please go ahead and use it.

P.S. When I figure out how to embed the ISRC code, I’ll upload it to Spotify. In the meantime, you can hear it here, or on Soundcloud. https://soundcloud.com/jacquesrusselltrio/ioanna