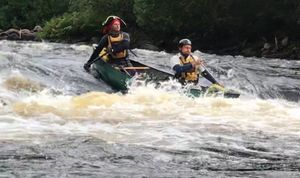 When most people think of camping, they imagine loading up the car with as much stuff they can stuff, and heading to a state or provincial park complete with comfort stations and convenience stores within driving distance. For other people, camping means trailers and blow-up mattresses. Either way, it’s easy to haul all the conveniences of home to enjoy the outdoors in comfort. Canoe-camping on the Dumoine River is a different experience. The Dumoine in the province of Quebec is an old fur-trading and logging river used by both aboriginals and Europeans. As one of the last remaining undammed rivers in North America, it’s about as wild as it gets.

You can only get to the put-in by float plane or on rough logging roads. Barely 15 minutes into the bush, you’re hit with the realization that there’s no cell reception, no Starbucks, and certainly no Facebook. (Thankfully.)

After being dropped off and unloading the canoes, the driver (or pilot) waves good-bye… and then you’re on your own. 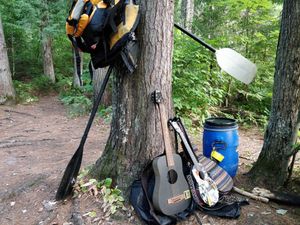 You have to pack carefully for a trip like this. Not enough can be dangerous. Too much is, well, too much -- especially on the portage trails, one of which is 1.6 km around Grands Chutes. (That’s French for ‘Big Falls’.) For most people, taking a guitar may seem ridiculous. It’s big, bulky, hard to carry and can easily get wrecked on a canoe trip.

For a musician, taking a guitar is more likely the first decision we make. Personally, I simply could not see myself spending 6 days away from playing guitar -- or ukulele. Yes, I packed them both.

But this was exactly the trip I got the KLŌS carbon fiber travel guitar for. It withstands extreme weather, bumps and scrapes don’t bother it much, and most importantly, it can take the occasional dunking. If ever there was a trip to put the KLŌS to the test, this was it... The truck ride on bumpy logging roads would have shaken the truss rod out of ‘ordinary’ guitars, but the real test would come on day 2, a long day of one set of rapids after another.

Water levels were low. Now, you might think low water would make life easier because the river has less power, but it actually means that the rapids are more ‘technical’. That’s because in high water, many rocks are too far below the surface to worry about. But in low water, they can hide just below the surface. Waiting.

Since I had paddled this river almost 18 times in the past 20 years, every bend in the river was instantly familiar like deeply worn neural paths in my brain. But it was the first time my wife was paddling with me, and it was her first time doing serious whitewater.

Things were going well. Then came Snake Rapids. Just as we thought we were in the clear, we misjudged our line and hadn’t given a slanted rock quite enough clearance. There was no slow-motion feel to this... one instant we were paddling; the next -- in the water.

THE KLŌS GUITAR AS A METAPHOR FOR LIFE?

It was then I remembered that my cell phone was still in my pocket, albeit in a ziplock bag, presumably waterproof. (I was using it for taking pictures, not for calling anyone!) My travel guitar was in the overturned canoe, inside an extra gig bag that I had purchased, also presumably waterproof.

We worked our way to shore where we gathered up most of our gear. One T-shirt that I had tied to the front of the canoe was missing. A map floated downstream. The ziplock bag that held my phone was full of water as was the extra gig bag, soaking the guitar.

But truth be told, I couldn’t have asked for a better time to dump my wife, so to speak, along my canoe with everything in it. It was a beautifully warm, sunny day. No one had panicked. All safe. Smiles all around.

When we got to our next campsite, I put my cell phone in the sun to dry out. I took out the guitar, drained the water out the sound hole, and gave it a strum... All good. 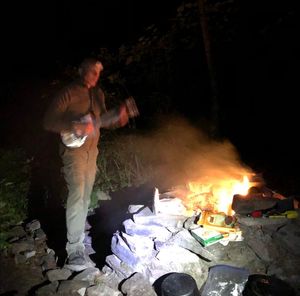 The KLŌS travel guitar has all the good qualities you want everyone to have on a canoe trip:

It’s obviously resilient -- able to take the bumps and scrapes that are all part of the experience. It’s flexible -- hey, I figured that worst case scenario it could double as a paddle. It definitely goes with the flow, and doesn’t get rattled no matter what happens. And, it’s always happy -- because a positive outlook is always a good thing!

I played my KLŌS guitar that evening around the campfire… and took pictures on my phone the next day.

P.S. If you’d like a virtually indestructible guitar or ukulele for your travels and adventures, I really do recommend the KLŌS! Enter ‘michelrocks50’ (without the quotes) at check-out to get $50 off, courtesy of my friends at KLŌS, just because I asked them.  Happy Holidays!