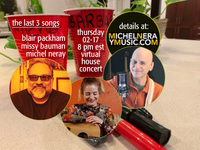 The Last 3 Songs House Concert with Blair Packham, Missy Bauman, and ME!

The Last 3 Songs Virtual House Concert with me, Missy Bauman, and Blair Packham!!

Click here to get on the guest list (or update your information if you’re already on it) and to get the Zoom code! https://forms.gle/ZRU92mSqpP2wkEuq7

Not only is Blair a VERY well respected songwriter known for oftentimes quirky lyrics; not only is he well-known for his 80’s band, The Jitters; not only is he the co-founder of one of the country’s best songwriting workshops; not only is he is also an accomplished music producer and studio engineer, not only has his television and film music work appeared on Global Television, CBC Television, CBC Newsworld, CTV, TSN, ESPN, Discovery Channel, MuchMusic, MuchMoreMusic, W Network, Oxygen, OLN, and others around the world.…. but on top of all that… Blair is one heck of a nice guy and a great storyteller, and a favourite on the house concert circuit. And, oh, Ron Sexsmith says this about Blair: “...one of Canada’s best unsung pop writers.”

Described by Rrampt Magazine as “…an exploration of the ethereal”, Missy Bauman’s music is more “anti-folk” than traditional – with lyrics that may catch you off-guard with intensity, vulnerability, the occasional blush-worthy remark, and deeply personal truths. What keeps Missy’s music “folk” is the value she places on the simplicity of good songwriting – bravery, an acoustic guitar, and honest storytelling. Bauman was discovered by a local festival director at a highschool coffee house, who described her as “…a true artist, fiercely committed to her writing, singing, and playing”. As if accidentally, she entered the music scene at 17, sharing stages with Emmy-Lou Harris, Gord Downie, and Feist. After winning two Hamilton Music Awards, she abandoned her bachelor degree dreams, and left to study music in Toronto.

Michel is 1/5th of Jacques Russell Trio. JRT is always a bunch of fun, with eclectic mix of blues, jump blues, trucker blues, jazz and pop, and some quirky originals thrown in for good measure. As a solo artist, he writes singer-songwriter songs full of angst, emotional conflict, evocative imagery, and all kinds of good things.

Between the house concerts and the ones I have been hosting with Jacques Russell Trio, we found that Zoom concerts have great audio quality + great interactivity. It's almost as if we really are together in the same room!

That's better than live streams not only for you in the audience, it's better for the musicians because we get to see you too.

There's a virtual tip jar with a suggested donation of $20 per person. Feel free to use it now! https://michelneraymusic.com/tip-jar/ It's fun!